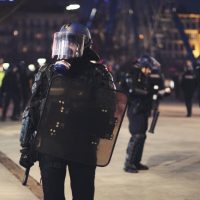 It’s very common for people to get confused by the difference between criminal cases, civil cases, and civil rights cases. A crime like killing a person is an offense against an individual and society. As a result, a prosecutor files the case in court in representation of the state. By contrast, a civil offense refers to a dispute between citizens regarding specific responsibilities and harms –– e.g. one person suing another for assault and wrongful death.  Civil rights case, however, takes place when an individual’s constitutional rights are violated by state actors (e.g. a police officer’s excessive force that caused a person’s wrongful death).These are matters for civil rights lawsuits.

Beyond the distinction as to what qualifies for such a case, however, it is also important to recognize how such cases ought to be dealt with. And when we explore matters of civil rights more closely, it becomes increasingly clear that criminal prosecution of offenders is not enough.

What is a Civil Rights Violation?

To expand on the above, a civil rights violation is a civil claim – not a criminal charge – that refers to situations in which an individual’s constitutional rights have been violated. Acts like illegal searches, the use of excessive force to arrest an individual, and causing serious injury or death in the course of law enforcement are common civil rights violations that can also be the basis for criminal charges. In civil rights cases, affected individuals can retain the help of a lawyer to seek accountability for the individuals and/or agencies involved; in criminal cases, the state has discretion as to whether to press charges and prosecute.

The Civil and Criminal Dichotomy of Civil Rights Violations.

In cases like the 2016 death of Philando Castile, sometimes the prosecution of the criminal cases can lead to disappointing results. In the case of Philando Castile, the criminal trial resulted in a not guilty verdict. As recent years’ reports on deaths caused by police have made clear, very few police officers are ultimately convicted in criminal court. In all, the prosecution of police officers occurs in less than 2% of fatal police shootings; and, in those 2% that actually do get prosecuted, few result in conviction. Perhaps the victims and families of victims should turn their sights from criminal prosecution to civil prosecution. While the death of Philando Castile resulted in a not guilty verdict in a criminal court against the offending police officers, those same actors, acts, and harms resulted in a $2,995,000 settlement in a civil rights lawsuit for money damages.

How Does the Burden of Proof Factor In?

Having alluded to both the inadequate frequency of criminal convictions in cases where there is a civil rights harm, it is worth considering how different types of charges –– and the burden of proof –– come into play. Because, despite the seriousness and severity of these violations, criminal prosecution often falls short.

The intention of most families when it comes to civil rights cases is to hold the authorities accountable for their behavior. And today, with so many cases of this sort revolving around incidents caught on video and audio, it seems as if that ought to be a straightforward matter. However, as clear as a crime might appear to be to the public, the nature of criminal prosecution is such that conviction is inherently difficult. The burden of proof is “beyond a reasonable doubt,” and a unanimous verdict is needed. Thus, if a single jury member finds a single aspect of the case to question, prosecution can fall short and the offender can be let off. And unfortunately, in the case of many civil rights violations, this only emboldens law enforcement. What’s more, in criminal prosecutions, the victims and families of victims have no control over the process – the prosecution is done by the state and the state’s prosecutors.

This is where civil action comes into play. While many in the general public (and indeed many victims and their families) may think of civil action as “less serious” than criminal prosecution, it will sometimes be a civil case that has a better chance of bringing about accountability. The burden of proof in a civil case is such that juries need only be convinced that there’s a greater than 50% chance that the claim is true, and the violation was committed. Thus, an offender who may be acquitted in a criminal case on the grounds that a unanimous jury was not wholly convinced that a crime was committed could be liable in a civil case if it is shown that the constitutional violation more than likely took place. And, unlike criminal prosecutions, the victims and families of victims do have control in a civil claim – they decide whether to hire an attorney, which attorney to hire, whether to file suit, and whether to resolve by settlement or trial.

Finally, civil suits can be significant. The below tragic cases have received national attention for their settlements and the settlements’ consequent effect on changing policy at the offending entities:

So, What More is Needed?

On a case-by-case level, we need to see more uses of civil filings when civil rights cases arise. While the rush to criminal prosecution is understandable and even necessary, we see all too often that the burden of proof is too great and offenders are let off. Victims and/or families affected by these crimes should be advised that pressing charges on both criminal and civil levels is more likely to yield a favorable result and hold the offender accountable.

Furthermore, it is important for all involved to remember that civil rights violations tend to be the results of persistent issues that need to be addressed on a larger scale. On a societal level, more needs to be done not only to pursue punishment, but also to prevent offenses and correct underlying issues. Perpetrators need to be held accountable, but should also undergo processes of rehabilitation that focus on reshaping unjust or harmful ideologies. Communities should be protected, but law enforcement should be reformed with a greater emphasis on community needs and equitable enforcement.

This progress begins, in many respects, with proper approaches to prosecution. When we focus so much on criminal convictions, rare instances of conviction are too easily treated as unique, one-off public dramas –– even (or perhaps especially) where murders and hate crimes are committed. A greater understanding of what civil rights cases entail, however, should yield more consideration of dual-step approach – criminal and civil prosecution. This approach will result in more success, which will in turn better highlight the need for systemic change and hopeful bring about that change that we so desperately need.

Submitted by Reese Jones for gildelawfirm.com

By Gilde Law Firm | Posted on July 19, 2022
« Common Causes Of Small Airplane Accidents
What Are The Most Common Office Workplace Accidents? »