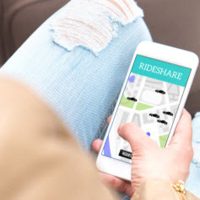 Gone are the days of being limited to using the telephone to call a taxi, or standing on the side of the street to hail one. With the emergence of rideshare apps, using cellphones to easily and conveniently call a rideshare, such as Uber, Lyft, Ola, and many others, has become the typical modus operandi of passengers everywhere going everywhere and anywhere. However, using a rideshare app to hail a ride is not completely without its risks, and rideshare accidents do occur. It’s easy to forget, when in the comfort of an air-conditioned car being chauffeured to one’s destination, that being in a rideshare is really the exact same thing as being in a car, and the same risks of driving on the road apply.

Hiring a Lawyer After a Rideshare Accident

Seek out Legal Help After a Rideshare Accident

Rideshare accident victims should seek out legal help as soon as possible after being involved in a rideshare accident. It is important to speak with an attorney who is skilled and experienced in rideshare accidents, and can navigate all the issues discussed (and more) with the victim, and educate them on their rights and options.

If you experience a rideshare accident in Houston, get in touch with the Houston personal injury lawyers at The Gilde Law Firm as soon as possible. We can help you learn your rights, options, and next steps.